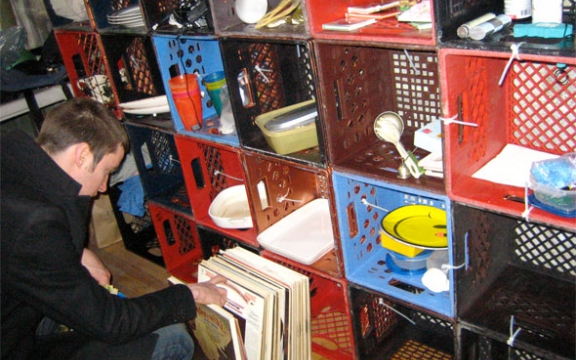 The concept of Share Squares is part of a new culture of mutual aid and share economies that is sweeping over Europe.   Share Squares are rapidly becoming the new norm for taking up public space and symbolize a need for a new kind of society, which emphasizes community rather than competitive individualism.

Occupy Antwerp is teaming up with Freecycle Antwerp for a series of monthly Share Square events in Antwerp.  This Saturday Feb. 8th they will kick off the new initiative at Groenplaats.

EVDP: Very simple, nothing is being sold or purchased.  Here everything is given away and you receive things you like.  You bring all the stuff that has been piling up in your house, stuff that’s been in the way, things you don’t need or use anymore, it could be anything really…clothing, toys, small household appliances, packaged foods, fresh fruits and vegetables, you name it.   You just make sure it’s a fun party with a lot of sociability and sense of community,… with music, snacks, and a lot of ‘giving’.

FD: The basic concept is that people bring stuff they don’t need and grab stuff they do need.  It’s an important initiative for people who have to live below the poverty line.  It’s also a way to expose poverty and condemn it.

LVDV: A share square is like the classic flea market but everything is free and everybody is welcome.

OPR:  From where did the concept of Share Squares originate and how well accepted is it these days?

EVDP: I couldn’t tell you where exactly it originated but it has been around for a few years.  The first time we heard about it was with the crisis in Greece when all of a sudden people started filling the stalls on the streets with free stuff such as clothing, food and small appliances,…The concept spread like wildfire and has become a real hype, one I hope is here to stay because it’s a win-win situation for everyone.  Plus you help reduce the enormous waste and it is in that sense also a reaction against the over-consumption of our society.

FD: A Share Square is a concept that, probably because of the crisis, originated in Greece together with the “potato movement” there.  In any case, the people of Greece gave notoriety to the concept when they started organizing Share Squares in Athens to meet the needs of the people who were being pushed into poverty on a massive scale because of the extreme austerity measures imposed by the government.  The initiatives created a snowball effect and gained a lot of support especially in the Western world, mostly because the numbers for consuming and food waste are the highest in the West.  We also have the dubious honor of hosting the biggest landfills.

LVDV: I don’t know the answer to the first part of your question.  However Share Squares are becoming more and more a common sight.  In addition to Antwerp I see Share Squares in other towns in Belgium like Merksem, Ghent and Sint-Niklaas.   Antwerp already has a permanent Share Closet and about five exterior public Book Stalls.

OPR: Why do we see the rise of Share Squares? What are they a response of?

EVDP: A lot of people can’t place this society of over-consumption, not in their wallet and not in their head. The share and gift economy is nice because it meets our needs in a fun, playful and social way. Sharing and giving have become pure necessity given the increasing rate of poverty, which means more and more people no longer have access to the most basic services and products.

FD:  Share Squares started because people were looking for creative solutions to the crisis.  But they are also a clear signal that people no longer wish to participate in this mentality of consumption of disposable goods and seek to reduce unnecessary waste.

LVDV: I think Share Squares originated from the LETS- concept* and from groups on Facebook that were founded with the specific purpose of exchanging goods. Not exactly the merit of Facebook, but it is an excellent tool for this.

OPR: Do you see the concept of Share Squares evolve into a real shadow economy and if so, what are the different elements of such a shadow economy?

FD:  Sharing economy or shadow economy has become a true initiative from people who organize themselves into groups and who take matters into their own hands without government interference. Autoshare or carpool initiatives, co-housing projects and short-chain agricultural projects are the main players in the fledgling Flemish share economy .  There’s already a lot of organisations such as Taxistop and others which existed for years, long before the term ‘shadow economy’ was coined. They, of course, have the most extensive user base of all of the sub-initiatives in Flanders but everything is relative, because the people that share cars or live in communities only constitute a small minority in the Flemish society.  Then there’s the large scale of volunteer initiatives such as the Repair Café’s but for everyday commodities a true share economy is still a far cry in Flanders although there’s promising initiatives these days such as Iedereenruiltmee.be , Wijdelen.be , Instrument Hake , Usitoo , Freecycle Antwerp , Occupy Antwerp , share stores , share closets etc. ..which are ready to convince consumers it is better to share than to own.

LVDV: I think there is a small revolution going on against the commercialization of our society and of the individual who merely is approached as a consumer rather than as a human being.  People are tired of being forced to constantly having to buy new things that quickly break down or expire and at the expense of the environment and their wallet.

OPR:  Is the sharing limited to material things or have there been initiatives such as the sharing of information, knowledge, advice, solidarity etc…And in what form do these concepts manifest?

FD: A good example are the Repair Café’s…there you can find advice and assistance on how to repair stuff so they last longer and you don’t have to constantly go out and buy new things.  We see that a lot of information and knowledge is being shared on a Share Square because people come together in a creative way.  For over two years Occupy Antwerp has been sharing information and knowledge through our Newspaper On The Ground and through flyers and has been giving advice on what you yourself can do about all problems in the world, in your direct environment or on a global scale. We also organize a lot of solidarity actions and all of this on a public square.  More and more people are now coming together, discussing issues and exchanging information and knowledge, as there are more and more initiatives, which in itself also leads to more initiatives. Freecycle Antwerp also informs people who are interested about our consumption- and ‘throw-away’ – society and gives solutions that may come in handy.

LVDV: There have been several other initiatives such as the Repair Café …broken things are mended together with the help of some useful Harry’s & Henrietta’s.  On Facebook, groups have already emerged to do odd jobs for each other and for themes such as permaculture where they share knowledge.

OPR: For this initiative Occupy Antwerp decided to work together with another organization, Freecycle Antwerp.  Can you give more information about this organization and will these kinds of collaborations happen more in the future? If so, what are the criteria for teaming up and in what way are decisions being made?

EVDP:  It’s always nice to be able to join forces.  With Occupy, it gets lonely at the top sometimes (laughs).  It is not difficult to work together with like-minded organizations.  The common goal, “to make this world a nicer place,” prevails .. Decisions are made in public, in group, and we hold People’s Assemblies on a square, we have ‘open’ groups on Facebook, and everyone can and should have their say .. Freecycle Antwerp is a Facebook discussion-platform-giveaway-page-oracle, so their concept fits perfectly with what Occupy Antwerp wants to do with this action.

FD: Yes, the plan is to organize a monthly share action with both Occupy Antwerp and Freecyle Antwerp.  Decisions are usually made online and also online we look for solutions to the practical things that come up.

LVDV: Freecycle Antwerp is really nothing more than a classic discussion group (such as yahoo amongst others), but the difference is that Facebook makes it possible for many people to become members, to share photos, ask questions, and there is also the advantage of instantaneous response.  So Freecycle is not really an organization, but the initiative of one person, who in the meantime gained two co-managers (moderators) of the group. Freecycle is therefore independent of any political, religious or any other ideology, except for an ecological ideology.

OPR: In what way does a Share Square differ from charity?

EVDP: I would not call this concept ‘charity”, I find the very word quite demeaning.  The word charity conjures up images of the “dignified” bourgeoisie who throws bones to poor people in the hopes of smothering the voices of complaint…. what we are doing here is just trying to give things a new home, a second life so to speak, without any ulterior motives, straight forward, so to speak.  And in these difficult financial times, it is encouraging that we continue to try to help each other in this way. And it is also a low-threshold concept.  Nobody needs to be ashamed,.. you give, you receive! Everyone is equal here.

FD: Charity is vertical and therefore it aims to keep the status of certain groups in society.  A Share Square is not charity.  We do this to show people that things can be different, that we should not join this consumption- and ‘throw-away’ -society and that if everyone helps everyone we no longer need the system. We can reduce our enormous waste, which is good for the environment and we condemn poverty.

LVDV: At a Share Square everyone is welcome and everyone is equal.  Charity is generally a more prosperous person who helps an underprivileged one. This does not always work because some people are too embarrassed to ask for help, which is not to say this wouldn’t play at a Share Square.  In any case, nobody will become patronized or given a label at a Share Square. Moreover a Share Square also has a great social function: it brings people together who are concerned with the environment (recycling) and/or an alternative economy.

With LETS there’s is a built-in system in order to prevent that some take a lot and give too little.

This system is an alternative currency, in Antwerp you have the “hands”, in other areas they have other local units. 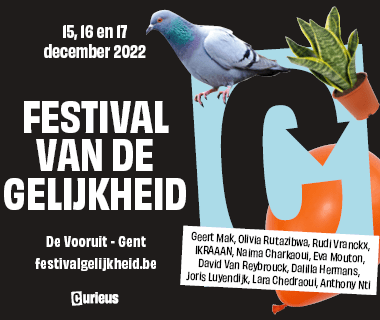