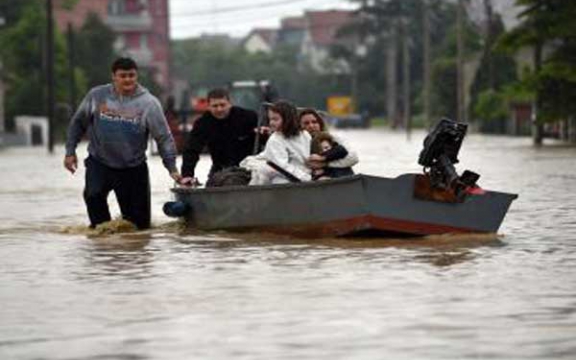 Serbia, Bosnia and Herzegovina, and Croatia have experienced floods since last week, the worst that the region has known since they began keeping records 120 years ago. In Bosnia, more than 1 million people live in the affected areas.

About 500,000 people have left their
homes and at least 95,000 homes are without power. Over 1 million
people have been cut off from clean water supplies. In Serbia, tens
of thousands of people have lost everything.

As many as 30,000 people
have been evacuated to collective centers, and most 50 people have
died. Landslides have moved land mines leftover from the wars in the
20th century, estimated to be as many as 120,000. The floods hit
Croatia on Monday; 15,000 people have been evacuated, and
unfortunately there have been two confirmed deaths. More about the
catastrophe and its implications can be found on Wikipedia page
http://en.wikipedia.org/wiki/2014_Southeast_Europe_floods

Knowing
that all of these ex-Yugoslavian republics still haven’t recovered
from recent wars, and this catastrophe made damages over a billion
euros, it is essential to help to the people of afflicted countries.

Here
is the info how you can make your donations of any size:

How
to help in Serbia

How
to help in Bosnia and Herzegovina

How
to help in Croatia