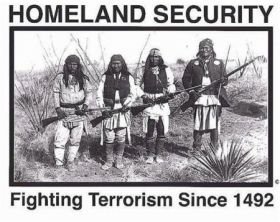 A BRIEFING ON THE HISTORY OF U.S. MILITARY INTERVENTIONS

By Zoltán Grossman, October 2001
COMMON THEMES
Some common themes can be seen in many of these U.S. military interventions.
First, they were explained to the U.S. public as defending the lives and rights of civilian populations. Yet the military tactics employed often left behind massive civilian “collateral damage.” War planners made little distinction between rebels and the civilians who lived in rebel zones of control, or between military assets and civilian infrastructure, such as train lines, water plants, agricultural factories, medicine supplies, etc. The U.S. public always believe that in the next war, new military technologies will avoid civilian casualties on the other side. Yet when the inevitable civilian deaths occur, they are always explained away as “accidental” or “unavoidable.”
Second, although nearly all the post-World War II interventions were carried out in the name of “freedom” and “democracy,” nearly all of them in fact defended dictatorships controlled by pro-U.S. elites. Whether in Vietnam, Central America, or the Persian Gulf, the U.S. was not defending “freedom” but an ideological agenda (such as defending capitalism) or an economic agenda (such as protecting oil company investments). In the few cases when U.S. military forces toppled a dictatorship–such as in Grenada or Panama–they did so in a way that prevented the country’s people from overthrowing their own dictator first, and installing a new democratic government more to their liking.
Third, the U.S. always attacked violence by its opponents as “terrorism,” “atrocities against civilians,” or “ethnic cleansing,” but minimized or defended the same actions by the U.S. or its allies. If a country has the right to “end” a state that trains or harbors terrorists, would Cuba or Nicaragua have had the right to launch defensive bombing raids on U.S. targets to take out exile terrorists? Washington’s double standard maintains that an U.S. ally’s action by definition “defensive,” but that an enemy’s retaliation is by definition “offensive.”
Fourth, the U.S. often portrays itself as a neutral peacekeeper, with nothing but the purest humanitarian motives. After deploying forces in a country, however, it quickly divides the country or region into “friends” and “foes,” and takes one side against another. This strategy tends to enflame rather than dampen a war or civil conflict, as shown in the cases of Somalia and Bosnia, and deepens resentment of the U.S. role.
Fifth, U.S. military intervention is often counterproductive even if one accepts U.S. goals and rationales. Rather than solving the root political or economic roots of the conflict, it tends to polarize factions and further destabilize the country. The same countries tend to reappear again and again on the list of 20th century interventions.

We Are One: samen nee zeggen tegen de afbraakpolitiek