Yesterday night we reconquered Puerta del Sol. After three nights in which the police wouldn’t let anybody into the square it felt like liberation day when thousands and thousands of people came walking over Alcalà to find that the square was open. It was almost worth it to be denied access to Sol for three days, just to experience this feeling.

Heavy discussions must have been going on within the palaces of power and the police force after the charge at the ministry of the interior last thursday, which resulted in about twenty wounded and various arrests. Everybody knew it would lead to a massive response from the 15M movement. The charge, and the occupation of the square, had been two huge mistakes. One of the biggest police unions had the courage to say their overworked officers were not at all happy to continue the occupation of Sol.

Already during the day the barricades were put aside and most of the police disappeared. Members of the 15M movement were allowed to walk around as ‘mobile information points’. They informed people about the protest march against the police violence of the day before. It was to start at eight from Atocha railway station.

We arrive half an hour early. In a small assembly a protocol is presented that had been drawn up earlier that day about how to react in case of police violence. Form a block, like a Greek phalanx, and stay together. Help people who fall to the ground or who risk to get isolated or arrested. In case of dispersion, regroup in a previously established meeting point. Write the name of the lawyer on guard on your arm.

When we move the group swells in a matter of minutes. Once again the boulevards are full, and filling the streets of Madrid in August, day after day, is no small achievement. The 15M movement is alive and kicking.

To capture the impressive size of the crowd, Jim and me climb all the scaffoldings we can find. But even from high up we cannot reduce the demonstration into a single image. It’s just people and people, and they all flow towards the ministry of the interior, the site of yesterday’s violent charge.

The police presence at the ministry today is relatively small, and the officers are very relaxed. No barricades, no gear, nothing. They seem to be so relaxed that it is almost intimidating all the same. The only thing that separates the police from the crowd is a cordon of journalists shooting pictures as the people shout ‘Shame on you!’ and ‘No to violence!’, and ‘Respect!’.

On the whole, fortunately, the attitude of the crowd is not one of anger, but one of moral superiority and respect. When someone dramatically offers a flower to a police officer the journalists jump on it like bees. Impossible to see if the officer accepted. We’ll have to wait for today’s papers.

After the brief scene at the ministery voices are raised: “To Sol! To Sol!” Tonight we will return to the square that has been unconstitutionally taken away from us since last tuesday, the square that has become the symbol of the movement, both here in Madrid, and in the rest of the world. “Tonight the sun is going to rise!”

Jim and me run ahead to capture the moment from above. As we climb up more scaffoldings, alarms are going off, but we don’t care. Who is going to arrest us with all these people passing by? The boulevard is packed from Cibeles up to Sol. We shoot footage and we climb down, we run towards the square, and once we realise that there really aren’t any police barricades any more we enter the Puerta del Sol, cheering with joy. Today is liberation day. Tonight is victory night. 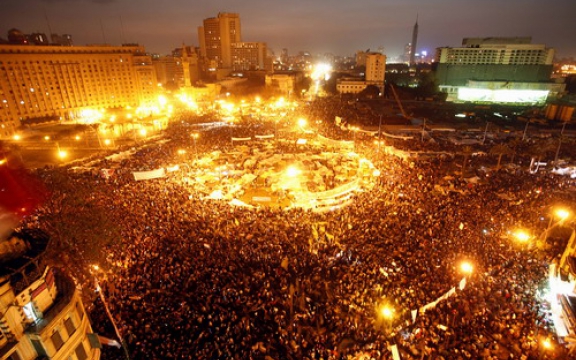 [Ra] When all leads to One 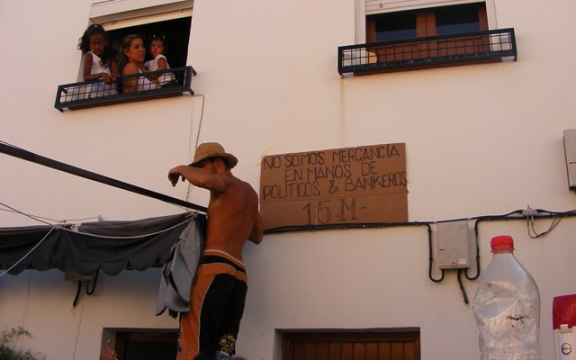