Why are some people in the West so eager to believe it’s the “rebels” who were responsible for the recent chemical weapons attack?

They seem to stick to this story regardless of the fact that Assad has used chemical weapons before and the fact that only his regime has the facilities to make chemical weapons. Why have the testimonies of Syrian people, operating and living in the area near Ghouta and stating it could only have been Assad, been ignored?  Why have the voices of local people not been taken into consideration?  Isn’t this a sign of terrible arrogance to think we know better than the Syrian local people?

“The demonization of activists is propaganda used by a system that feels threatened by the existence of a popular uprising.”

Consider this statement from an eyewitness:

“I will tell you only one truth. …why were the UN fired upon by snipers?? I can tell you why because we have a spy inside with the inspectors, who told us everything..exactly what happened. The regime drivers who were taking the inspectors to the sight, had every intention, as always, to take them into another area, not the sight of the attack, fortunately the UN inspectors started shouting, as their GPS systems showed them this was happening..saying ‘WE WILL TELL YOU WHERE TO TAKE US!” Then the panic started within the regime forces..what were they to do, not wanting to take the inspectors into the area THEY HAD HIT WITH CW!! as the cars turned into the correct area, decisions were made to try and stop them entering by ordering regime snipers to fire at them..fortunately it didn’t work, and as actually killing any UN inspectors would have been an even bigger mistake..well that’s the unquestionable truth, reported to me by several contacts, but mainly by the person who knows.

So those of you with your conspiracy theories..I was inside, saw it all saw the start was with the protesters every step of the way in Homs..watched them die, watched who killed them, watched the planning by the innocent people initially never believing that the regime forces would actually kill them..were forced to face the truth, and then protect themselves, and then others..left to die alone as the West watched..so if there was any conspiracy it was to watch us die..nothing more..and fact..they would have preferred if Assad stayed..gave him his chance, but the PEOPLE were stronger!! so now they HAVE to face the fact that he is finished, and their only plot will be to try and place a puppet in his place, but that too wont happen because we have all lost too many and too much, and ISIS* will be dealt with as the regime spies that they are, and JAN*, will be sorted and follow the correct path or leave, the majority of them are in fact locals..FACT! and the biggest change will take place when the refugees return, the empty areas gave the wicked a chance to try and take over our revolution..when the people come back..things will change and THEIR wishes only will be fulfilled.”

ISIS is Islamic State of Iraq and Syria

Granted, there’s undeniable footage of atrocities done by “rebels”, but exactly who makes up the opposition, which the Mainstream Media refers to as “terrorists”? Are they all the same?  No, they are not.  Often the Free Syrian Army and the freedom fighters are lumped together with Al Qaeda, Muslim Brotherhood and Islamic Brigades.  They shouldn’t be.  On top of that, the Free Syrian Army itself is not a homogenous group but a broad coalition of Syrians including Assad defectors, Syrian Christians, Syrian Kurds and so on.

“To believe that everybody in Syria is, per definition, a violent thug and capable of unimaginable atrocities is essentially racism and this kind of thinking is part of the ubiquitous Islamophobia that is sweeping the West.”

Why is it so unthinkable for Western people there might be genuine peaceful uprisings in other countries in the face of oppression?

Occupy itself has been classified as a terrorist organization. Imagine if the rest of the world would view occupiers as real terrorists.  The demonization of activists is propaganda used by a system that feels threatened by the existence of a popular uprising.
Furthermore, to believe that everybody in Syria is, per definition, a violent thug and capable of unimaginable atrocities is essentially racism and this kind of thinking is part of the ubiquitous Islamophobia that is sweeping the West.

Even when people realize not all of the anti-Assad groups are the same, some still cling onto the idea that it was the “rebels”, whoever they are.  Why are people so certain it wasn’t Assad who engaged in this attack?
One possible explanation is that it fits into their theory that the US needed a reason to start a war with Syria.  The mistrust in the US government is justified when we remember the lies surrounding the Iraq war for example. The US was indeed looking for a way to get involved and for various reasons; they need to be in a perpetual war as to ensure their ever expanding need for profit, they want control over the region and ultimately they want to get to Iran because they need to secure the petrodollar and Iran is a threat in that matter.  Undoubtedly these are not the only reasons.

However, going to war means they have to fight the official entity that is in power and since that is still Assad, the attacks had to be blamed on him or so the theory goes.

“Some people, in their eagerness to prove their theory right, are now even arguing that Assad, aptly named “The Butcher” in Syria, is bad but not that bad.  Would these same people have defended Hitler if that would serve their theory?”

Obama had stated that once the regime would use chemical weapons a red line would have been crossed and they had to go in, hereby completely ignoring the fact that that red line had been crossed a long time ago.

Was this statement a warning or was it in fact an invitation?  And who took him up on this invitation?

The locals claim all evidence points in the direction of the Assad regime.  Unfortunately that doesn’t fit into the theory of “the US government is tricking us into war by blaming Assad for an attack against his own people” so it had to be the “rebels” if we want that theory to add up.  Or does it have to be?  Reports have emerged of finger pointing inside the Assad regime, which could be an indication of traitors or infiltrators.

“Americans and Europeans have more in common with the people of Syria than with their own ruling class and it is time we realize that.”

As usual things are not as simple as outsiders make them out to be or as various mainstream media and conspiracy channels would like us to think, namely that the attacks were done by either Assad or the rebels.  It is not either or.  It’s not black or white.  The opposition is not one homogenous movement and different groups are fighting each other, while at the same time the Assad regime itself seems to have different fractions.

Some people, in their eagerness to prove their theory right, are now even arguing that Assad, aptly named “The Butcher” in Syria, is bad but not that bad.  Would these same people have defended Hitler if that would serve their theory?

One thing is abundantly clear though and that is that in any situation of war and conflict the rich people make money and the poor people suffer.  This is the only truth and that truth exists all over the world in every country.  Americans and Europeans have more in common with the people of Syria than with their own ruling class and it is time we realize that. 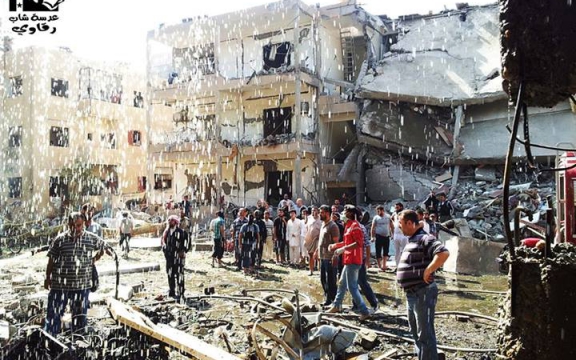 OCCUPY ANTWERP. A lesson in Firmness, Fortitude, and Bad-ass Stubbornness.