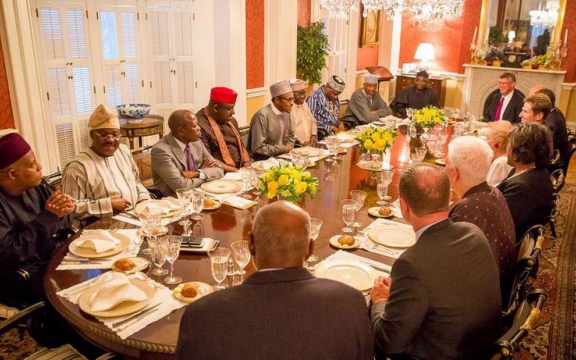 Postcard from Brussels to President Buhari on U.S. State Visit

Belgium became my adopted home over 20 years ago. Since the last 9 years when I went into party
politics, I have maintained a routine of coming together with friends, Africans
and Europeans, on the eve of the National Day, which is 21 July, for a drink
and a chat. This routine has slowly graduated to a tradition. I’d normally use the occasion to feel the political pulse
of friends and take home some useful hints. How we are faring in the local
legislature was always the overarching questions for me as we converge? The
drink and chat this year was different for two reasons. One, our drink was
preceded by what the organisers called ‘Wake-Keeping for Greece’. I was invited as Municipal Legislator to deliver a
short speech at the gathering meant to show solidarity for Greece on its
current economic tribulations. Two, ninety per cent of our conversation
centred, not on Belgian national issues, but curiously on Nigeria, my country
of birth. In specific terms we talked about ongoing State Visit of President
Muhammadu Buhari to the United States, the same topic that had engaged me and a
think-tank of Nigerians over the social media in the last week heightening a
few hours before our drinks commenced.

I thought it meant sense
to send this postcard to Mr President and people of Nigeria to summarise the
preoccupations of people out here about Nigeria. Nearly 48 hours into what is
meant to be a 96 hour official visit by President Muhammadu Buhari, there has
not been visible international media coverage of a trip sold to Nigerians as ‘historic’. It should have been
historic because it is Mr President’s first major state
visit since assuming office about 2 months ago. My folks here seem to believe
that the visit is indeed historic but for the wrong reasons. A European student
of contemporary African history and an avid watcher of Nigeria said he couldn’t immediately recall any previous first State Visit in
recent history that appears to lack this much vision and focus. I was at a lost
for a response when asked what the strategic intent of the visit was. What is
historic about this State Visit?

I attempted a response
based on available media briefing from Mr President’s team and indeed in line with popular and reasonable
expectations. The economy was meant as one of the major focus of this state
visit. Indeed President Buhari is also expected to make public addresses at the
U.S. Chamber of Commerce in Washington DC and at the Corporate Council on
Africa to discuss international investment and Nigeria’s economy. The question that begs answer is how many
members of the robust Nigerian Chambers of Commerce are in the delegation?
Which business leaders of note are in the Presidential delegation? One is keen
to know if Mr President shares the view that the most critical aspect of
Nigeria’s economic concerns at present is economic
diversification, away from the monolithic oil revenue. Which experts in
economic diversification theory and professionals are in the delegation?

On the political side of
things, we were told by the media team of Mr President that U.S. Secretary of
State, John Kerry, and the U.S. Congressional Committees on Foreign Relations
will also receive President Buhari to discuss political ties between the United
States and Nigeria. The Congressional Black Caucus in the U.S. House of
Representatives will meet with members of Nigeria’s delegation as well. One astute Buhari supporter who
jokingly said during the election campaign that Nigerians must vote anybody but
Goodluck Jonathan felt strongly that it is only normal that for Nigeria to
derive the best return on investment for this trip, members of Nigerian
Legislature should have been part of the delegation even if there is a face-off
between them and Mr President. If I ever get to see Mr President, he told me, I
would probably ask him to consider sharing with me the rationale behind the
exclusion of National Assembly (NASS) members in his delegation to the U.S.
When asked, I had nothing to say except to deny that the President’s actions could have been dictated by bad blood
between him, Senate President, House Speaker and other Legislators because of
the way they ganged up against his party’s choices for the top positions in the NASS. Mr
President, please tell me that I am right!

Closely related is the
concern that any deal reached by Mr President with both President Obama and the
Congressional leadership would have to be ratified by the same Nigerian
Legislators that have been excluded. Characteristic of these Belgian friends
out here, is how they can put you on the spot with very uncomfortable
questions. And directly too! This one got me struggling: could it be that considering
the majority lead of the ruling All Progressives Congress (APC) in the upper
and lower Houses, an easy ratification by the NASS of any agreement reached by
Mr President during this visit with U.S. Congress may be expected? If so,
shouldn’t we be concerned that our Legislators would be
ratifying an Agreement on a position of weakness and lack of knowledge? How
good is this in developing the legislative capacity of Nigerian Legislators?
These guys could be polite as well because I believe the question they are not
asking, out of politeness, I think is: for how long will Nigeria put up with
Legislators who have no clue of what is going on at the floor of their
legislative Chambers?

Getting mildly
irritated, I told my pals that I am conscious of the fact that this
administration came into power on a promise of change. And for heaven’s sake, they have been in power for just 2 months and
it’s unfair to expect magic as of yet. In a somber tone,
the otherwise loud chap behind me in the bar, bent over, his neck slightly bent
and almost whispering reminded me that Prime Minister Alexis Tsipras of Greece
took only a week or so to constitute his cabinet. That aside, he asked if I was
willing to swear on the head of my first son (he understood the place of first
sons in my culture) that the few appointments so far made and the composition
of the delegation to the U.S. were based on meritocracy? Do you now support
political patronage, against the gospel you preach to us in the City Council
because it’s about Nigeria, he asked, a bit agitated. I retorted
that a selection based on who represents a better comparative advantage for the
nation is my preference and I have no evidence that the President has done
things differently here.

I send this postcard
conscious of the fact that Mr President has information that I am not privy to,
which may have dictated his plans and actions but I felt a sense of
responsibility, maybe obligation, to convey these raw thoughts considering that
I am unable to reconcile a few available and obvious facts with the principles
of good governance and strategic planning. It should be noted that friends of
Nigeria, but particularly its critiques need to gain deeper understanding of
the rationale behind the policy path Nigeria chooses to walk so that proffering
constructive solutions for the plethora of issues retarding Nigeria’s national growth, could be made easier.

Integration in the margins