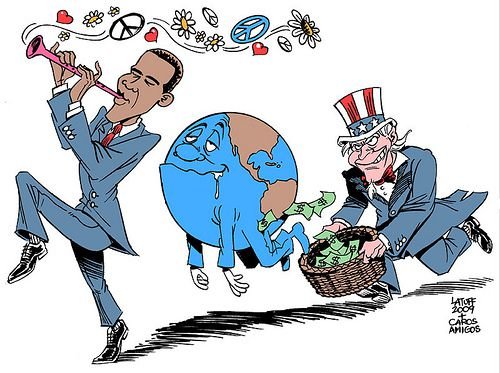 Obama, an arms salesman for the american military industrial complex.

Obama and the Middle-East Arms Race

During the Tunisian and Egyptian revolutions the World saw Obama and Hillary Clinton appear frequently on global TV calling on the two aforesaid regimes to practice restraint.
They have suddenly gone off the air perhaps following the Fortune magazine expose “The Bomb Biz” (cover story) in their February 28, 2011 Asia Pacific Edition. Being subscriber, it reached my letterbox on 18th February.
Although Obama’s election campaign theme was ‘Change’, nothing has changed. People around the World thought he would be a peace advocate and, was prematurely awarded the Nobel Peace Prize, but this is far from reality. In reality, he has sold over $100 billion of arms to the Middle East.
He has become an Arms Salesman for large American military industrial complexes which employs around 200,000 people.
These are some of the numbers: Israel $25 billion, Iraq $29B, Saudi Arabia $67B, UAE $28B, Oman $4B, Egypt $7B, Jordan $1B, Turkey $10B, Kuwait $8B, Bahrain $304 million, Qatar $400 million.
Using the fear psychosis based on assumptions that Iran is enriching Uranium to build a NBomb, they have armed countries surrounding Iran with an arsenal of weapons ranging from Raytheon’s patriot systems (which was used a lot during the war on Iraq), F-15 Fighter Jets (at a $100 million apiece), Apache Helicopters, and Chinooks – transport helicopters).
Other weapons include General Dynamics battle tanks which were seen in Tahrir Square. American made tear gas was used a lot in the early days of the Egyptian revolution and in Bahrain. Ironically, those very Abrams battle tanks were used as shelters by protestors in Tahrir Square.
Recently, he visited India and I must say I was piqued that he did not include even a flying visit to Sri Lanka! Of course, we are monsters with human rights violations, or are we? His Indian visit was a sort of “Thank you” for India’s recent purchase from USA of six C-130J Super Hercules jets worth $900 million. Peace Dove my foot! He has even waived the ban on sale of arms to countries like Sudan and Chad which have child soldiers.
To quote Fortune: Even dovish Presidents have succumbed to the utility of arms exports. Take Jimmy Carter, who addressed the issue in a 1976 campaign speech: Sometimes we try to justify this unsavoury business on the cynical ground that by rationing out the means of violence we can somehow control the world’s violence. The fact is that we cannot have it both ways. Can we both be the world’s leading champion of peace and the world’s leading supplier of the weapons of war?” Two years later Carter himself sold 200 fighter jets to the Mideast.
If Sri Lanka were to order some fighter jets, Obama would indeed visit us, but until then we will continue to be harassed with allegations of war crimes.
Linda van Schagen
Mt. Lavinia