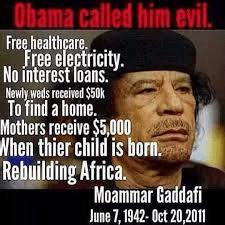 In Benghazi, a Nostalgia for Gaddafi as Libya’s Rebels Fail to Keep the Peace

The death of Major General Abdel Fatah Younis under mysterious circumstances on July 29 has left many residents of what is called Free Libya questioning how the rebels’ political organization can ensure their safety when it could not even protect its chief soldier. The National Transitional Council’s (NTC) inability to provide security for areas under rebel control has made a few locals nostalgic for Gaddafi and the stability his brutal regime provided.

Younis was called back from the front to respond to undisclosed charges on July 28. The next day NTC chairman Mustafa Abdel Jalil announced his death although the council could not produce his body. The rebels’ Finance Minister Ali Tarhouni quickly blamed a rogue Islamist brigade of fighters for the assassination, even though the NTC dispatched hundreds of soldiers in an 85-car convoy to take Younis back to their capital, Benghazi.

Tarhouni’s accusations have kindled fears about the proliferation of dozens of militias who do not answer to the NTC’s military leaders but to their own brigade commanders. These units possess sophisticated weaponry, ranging from antitank missiles to rocket-propelled grenades, which some worry could be used to settle personal accounts. Sporadic gunfire can be heard daily in the rebel capital, and hundreds of men walk around town armed with Kalashnikov assault rifles.
Abdel Jalil alluded to the problem of militias in an Aug. 6 press conference when he said, “Arms on the street will be reordered for best use … there is no need for all these armed groups within the cities.” His comments did not go unnoticed in Benghazi. “If the NTC cannot bring these militias under their control, how do they expect us to trust them to protect us?” asked a resident outside a local grocery store.
For months Benghazi citizens feared that Gaddafi’s revolutionary committees and a fifth column loyal to him were wreaking havoc in the city.

But today their concerns focus on gangs wearing the army fatigues favored by the rebels, terrorizing citizens and robbing them at gunpoint. “It is not safe anymore to travel in some parts of the city,” says Dawud Salimi, 41. “Criminals are taking advantage of the instability for their own profit.” Recently, they have targeted foreigners. A group of men wearing military outfits broke into the hotel room of a Western journalist, assaulted her and ran off with her electronic equipment.

The security unrest has made many worry about what will happen if the rebels finally overthrow Gaddafi. “People speak of tribes settling old accounts and power struggles emerging,” says political-science professor Salah Senoussi of Garyounis University. “Gaddafi’s fall could turn out to be the opening salvo in a prolonged conflict between various factions. And with all these brigades having their own weapons and not answering to the NTC, we could see a lot more violence.”

Such security fears have left some longing for Gaddafi. “There were a lot of problems under Gaddafi,” says Ali, 41, a launderer who asked that his last name not to be published because he was speaking about a sensitive topic. “But at least we knew what to expect and he could provide us security. Today we don’t know what will happen tomorrow, and that worries people.” And with the NTC unable to assuage their concerns or arrest Younis’ killers, residents there fear that the security situation will only deteriorate.