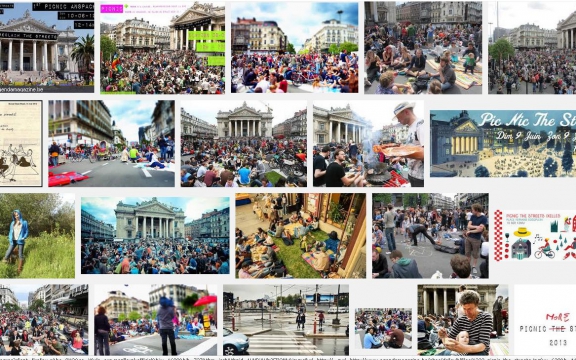 From Hotel Central to Picnic the Streets: small panorama of urban activism in Brussels

[English translation of a text from 2014, originally published in Dutch on this blog]

In the 80’s Brussels was a silent, slowly decaying city, having a hard time coping with the emptying out of the city (the so called ‘stadsvlucht’ or city flight of the 60’s-70’s) and the city didn’t seem to have a clue how to make the transition from an industrial to a post-industrial era. A London friend of mine was charmed by the slumbering metropolis of second and third order. ‘Let it slowly crumble’, was his mantra. And he wasn’t entirely wrong: it was charming.

I arrived in 1986 as an unemployed philosopher living in the block of Hotel Central (a dilapidated hotel), in the Ortsstraat, right across from Beursschouwburg, an incredible spot, with a view from my balcony towards the Stock exchange (de Beurs). A few years later the building bloc was evacuated. The cockroaches from a snack bar’s abandoned kitchen came looking for food and the rats crawled up the stairs towards the end of this period. When the rumor got confirmed that the whole housing block would be torn down for a new and hideous building, a coalition was made between current residents, residents from the neighborhood, people from Sint-Lucas Architecture, RITS mediaschool, and of course the staff of Beursschouwburg, which was to become the epicenter of the whole action: the squatting or occupation of Hotel Central. There was a lot at stake: a complete housing block in the core of the city would be destroyed to the ground, yet another example of ‘Verbrusseling’ or ‘Brusselisation’, further scarring an already molested city. A clash of giants the action was. All was already arranged: from plans to building applications, everything. People involved were aware of the historical importance of this occupation: at stake wasn’t only the architectural heritage, but also urbanity; the right towards residential accommodation: next to hotels, shopping accommodation, bars and restaurants, the aim was mainly that the dwelling function would be kept.

It was the atmosphere of the Big Days. Street parties, squatting, negotiations, police raids… Those who were there, will never forget. The cinema right in front of the Beursschouwburg was one of the occupied spots. “urban squat dance”, I still remember, was one of the activities taking place in the cinema. The poster with the description was still hanging outside the building long time after. The battle about Hotel Central was a turning point. According to some people it was the start of urban activism in Brussels. Later on the occupation of the Luxemburg station emerged from that and so did City Mine(d), an organization of city activists. The occupation of Hotel Central, as arch event, should at some point be documented, now that somehow most of the participants are still alive.

The activists gloriously won the battle: the housing block of Hotel Central is still standing and this is an absolute triumph, as at the start it seemed like a lost case. But unfortunately, the Marriot Hotel that now takes up a big part of the housing block (former Hotel Central and cinema), isn’t really the thing that we as activists were dreaming of: a ‘corporate hotel’. It seems like an iron, devilish law: urban activism leads to gentrification. But at the same time: architecture is patient, who knows this housing block will find another and new destination in a far future.

The later occupation of the Luxemburg station, unfortunately exhibits an similar pattern: the historical station at the Luxemburgplein –which, right in front of the colossus of the European Parliament, and closes and crowns the square that was built as one unified ensemble – was saved (hip hip hurray!). But it’s now the ‘Belgian Press Center’, not really the thing one imagines when thinking of the connection between Europe and the city of Brussels. Here as well, we must perhaps have patience and see the saving of this architectural piece of heritage as an aim in itself.

From these and other similar actions emerged City Mine(d)… a city activist group whom are doing actions, events and experiments all over the city, for several years now. Apart from Brussels they’re also active in other cities, such as London and Barcelona. Cinema Open Air, an outdoor film festival, taking place in abandoned spaces of Brussels was one of their most known and fully crowded events for years. But most of their projects aim more towards depth and are small-scaled, with little media-attention: now for example they’re focusing on water in the European quarter.

‘Brussels 2000’, European Capital of Culture, was an important milestone in a conscious, activist way of dealing with the city. Although the overall project was strongly hindered by Brussels ‘communautarian’ (Francophone/Flemish) infighting, the activist approach remained intact: de Zinnekeparade, a legacy of Brussels 2000 is ever since an bi-annual parade which is prepared by different neighborhoods and groups of multicultural Brussels during the two years. A moment of collective festivity, a feast where the many different communities come together.

Although the squatters’ movement in Brussels never was as broad as in Amsterdam, there were several experiments with the idea of “collective appropriation” which are worth mentioning. The sad end of the Jesuskerk with a dramatic evacuation in 2013, but there’s still the squat ‘Koningstraat 123’ and ‘La Parfumerie’ (near Ninoofse Poort, now gone too), lots of different bottom up ‘cultural institutions’ where the verb ‘commoning’ (‘communalizing’, sharing) is central. Living, eating, composing, watching movies, debating, painting… doing all of  this together.

The craze about urban gardening (also guerilla gardening and urban farming) has in the meantime arrived in Brussels. An early example is the collective garden on the roof of the Royal library. But also at places such as Ninoofse Poort, Park Canal and La Parfumerie people are experimenting with urban gardening. Although most of the projects are small scale, temporary and slightly pathetic, it’s the symbolic value which counts: it’s the activity of the common taking care of food that has been forgotten in our society. In times of ecological awareness, food shortage, economical crisis, urbanization of humanity, the necessity to ‘vegetarianize’ of our diet, these are potentially very important initiatives. Cooking and gardening together are obviously basic activities of community building and of each act of ‘collective appropriation’.

There is for example Parkdesign, an initiative of the Brussels Institute for the Environment. After last year’s experimenting with landscape interventions in abandoned places nearby the canal area, this year (2014) they’ll start working in Tour and Taxi’s (between the two bridges at the end of the old custom-station). Here as well, urban farming will be the core of the project.

Another important experiment are the so called CLT’s (the Community Land Trusts) in Molenbeek, a form of collective living, whereby the ground, mostly old factories or stack houses, stay property of the city, but the buildings are used to live in collectively. Besides the fact that it makes living in the first place much cheaper, it also stimulates a new way of living, the so-called collective living and counteracts the gentrification (as the ground is kept city property).

‘Josephat Commons’, in between the station of Evere and the Lambermontlaan near the Josaphatpark can be called an abandoned place: it’s an open space (an old railway yard), about 24 hectare or as big as 46 soccer fields. Although the region has plans, a group of activists is busy brainstorming to demand this giant open space (or at least a part of that space) as ‘commons’, as common ground, as city garden, etc.

Furthermore, there is: Cyclo Guerilla, a group of activists who paint cycling paths where there are none; park ludic; park kanal; the facebookgroup I love Molenbeek; etc. Too many to name (and probably loads that I don’t know the existence of). But of course we still have, Picnic the Streets, an action of civil disobedience, encouraged by the Belgian economist and philosopher Philippe van Parijs: in an opinion piece that was published in newspapers and went viral on Facebook, he had launched an appeal to occupy the Beursplein (in front of the Stock Exchange) to make clear to the city that this should be a car free zone. It became an overwhelming success: 2000 picnickers came together at the Beursplein in June 2012 to remind the city council that 10 years earlier they’d promised to make the Beursplein a closed area for pedestrians. The mayor couldn’t do anything else than give permission for the action. Making the area pedestrian would happen soon (which happened in the meantime and is a story in itself…).

With that the circle is complete: Hotel Central and Picnic the Streets are literally neighbors (as the Hotel Central block is located at the Beurs). Both prove that urban activism not only takes place in the abandoned parts of a city, the vague terrains, the waste lands, the ‘interstitial spaces’ of the city, but also right in the middle, in the center of a city. The right of a city is also the right to centrality (as we know since Henry Lefebvre).

[Translation: Sien Van Dycke, student at P.A.R.T.S, translated on the occasion of me teaching there in January 2016]