Call for a European Assembly For Climate Justice: Brussels, November 18-20, 2011

Following the failure of the Copenhagen climate conference at the end of 2009, and the dangerous agreements reached in Cancun one year later (which put the world on track for a 4 or 5 degree rise in global temperatures) there is more need than ever to build a movement for climate justice. This movement must push for real solutions to the climate crisis, starting with a radical shift in the consumption and production patterns of the rich industrialised countries, and opposing the “false solutions” to the climate crisis such as nuclear power, the massive use of agrofuels, and international carbon trading.

In November last year, a group of Belgian and European movements and organisations- including European Coordination Via Campesina, Climate Justice Action, Friends of the Earth, and the Belgian movement “Climate and Social Justice” organised the European Assembly for Climate Justice. Over 250 climate justice activists, trade unionists, students, small farmers and people from other social and environmental movements from around Europe came to Brussels for 4 days of actions, discussions, workshops and debates. The aim of the Assembly was to build a movement that can put forward socially just answers to the climate crisis, in solidarity with those communities in the north and south who will be the hardest hit by the impacts of climate change.
See http://www.climateassembly.org for a review of the event.

The organisers of the Assembly are keen to see another Assembly take place in Brussels from 18th to 20th November 2011- shortly before the COP 17 UN climate conference in Durban in November/December. This event would build on the foundations laid by the Assembly at the end of 2010, and provide a space for environmental and social movements to come together to take action, discuss strategies and make plans for building a movement for climate justice in Europe. It will also be a space to discuss the real solutions to climate change including: the transformation of the energy system away from nuclear power and fossil fuels – towards democratically controlled renewable energy, and energy efficiency; food sovereignty; and alternatives to market based solutions to the climate crisis.

Holding the assembly one week before the start of COP17 will hopefully allow people who will also be travelling to Durban to attend the Assembly. The groups making this call are also supporting the international demonstrations on climate change, on 3rd December.

If you, or your organisation, is interested in helping to organise the Assembly, or if you have suggestions for the programme (or if you just want to stay up to date with the plans), please get in touch via: 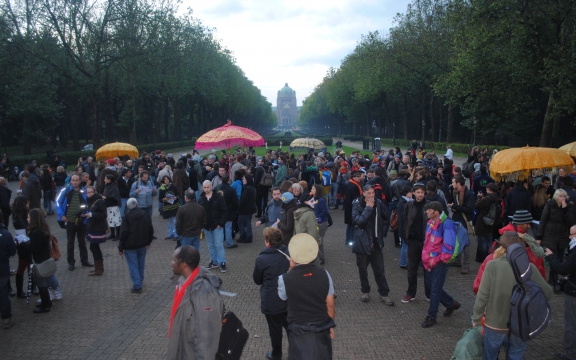 48 ‘Indignados’ spent the night in the Brussels police station after refusing to leave the Elizabeth Park.