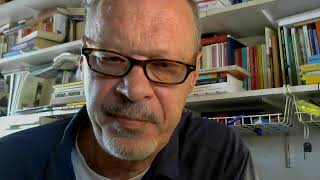 This article was written in co-operation with and is dedicated to Jan Blommaert in 2017 before he passed away in 2021. May his soul rest in peace.

People are constantly telling stories, and those stories have a number of characteristics:

-they are told to others, and with others, stories are interactional things;

-they have a function, and they are usually argumentative: people try to make a point through stories;

-they have a non-arbitrary form, an effect of the intended function and the resources available – language resources and other communication competences. And those resources are shared: the ‘audience’ also help build the story.

In the following we give a brief example of how this works, and our goal is methodological. We want to show how a certain type of analysis (known in sociolinguistics as ‘ethnopoetics’) enables us to discover an implicit world of norms and identity constructs through the structure of a story moment.

The fragment is a (rough) transcription of the recording of the opening session of a project called “Het Leerhuis”, organized by Motief vzw in Antwerp, March 2017. In this project Muslim women with a migration background (predominantly of Moroccan origin) are brought together to talk about the relationship between their faith and the everyday world. The fragment is situated in the first round of this session. The women were asked to explain their names. In the fragment the names have been changed, and we call the narrator ‘Nah’ here. The recording was made with the consent of the women present, and this example is part of Eva Vergaelen’s PhD research. 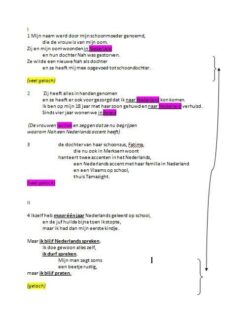 How do you read the transcript? An ‘ethnopoetic’ transcription like this one assumes the non-arbitrariness of the form that stories take. So we pay attention to the following elements.

Stories are not linear, but contain main points and side points that together form argumentations, and are divided into thematic and / or logical-argumentative episodes. We see 4 such episodes in this short fragment. Episodes 1, 2 and 3 are in a stepped hierarchy: 2 completes a point from 1, and 3 in turn is a further support of 2. Episode 4, on the other hand, is on a level with 1, making two major get umbrella units (Latin I and II). These relationships are represented by numbering and indentation.

Also within the minor episode units we see such relationships of main and side points; here too indentation is used to represent these elements.

The construction of narrative units and the narrative argumentation proceeds via form elements that are called (after Roman Jakobson) ‘equivalences’: repetitions (with slight reformulation if necessary), parallelisms and contrasts. For example, in episodes 1 and 2 we see how the personal pronoun “she” (the mother-in-law) plays a structuring role; we also see the frequent repetition of “The Netherlands” in episodes 1 and 2 followed by the contrast “Belgium”, and of “I keep speaking / talking” in episode 4.

The other symbols – the braces with arrow, and the two colors used – refer to elements of the analysis that follows. We give some points.

A first elementary point is the way in which the story is constructed through a continuous interaction between the narrator and her audience. There is a great deal of research in which the listener of stories is made invisible – they leave out questions, interruptions or other forms of reaction. However, they are of the utmost importance, and we see that clearly in this example. The audience’s ‘laugh’ responses are crucial to understanding how Nah makes her point through this story.

After all, the responses are always ratifications, i.e. normative evaluations by audiences about what they have heard. Agreed nods or murmurs indicate that one shares the narrator’s normative frameworks; disapproving reactions indicate its exceptional or incorrect nature. The laughter from the audience here is mainly empowering, reflecting the recognition of the validity of what Nah is saying. We are now working on this further.

Although the indicated theme of Nah’s intervention is her name, we see that she immediately sets up a completely different story: an identity story. This immediately starts in episode 1: Nah tells that she got her name from her mother-in-law in the Netherlands, and from that moment on she directs the whole story towards Nah as a speaker, more specifically as a speaker of Dutch.

She also ends episode 1 with a statement that immediately provokes laughter from her audience: “she helped raise me as a daughter-in-law”. This ‘typifies’ Nah in the group, it gives her a typing identity as a woman who came to Naderland at a young age to eventually marry a man chosen for her – the “traditionele type “, to summarize the lapidary (but with a lot of respect – see below). In episode 2 Nah builds on from that point:” The Netherlands “is repeated twice, and then followed (as a contrast) by” since four years we live in Belgium “.

The laughter and buzz that follows is what we call an ergoic response – from the Latin “ergo”, “therefore”. This little piece of Nah’s life story suddenly makes something clear to the other women: it explains why in their eyes Nah has a Dutch accent when she speaks. And with that we have shifted from theme: from name, to migration process, to language use.

The sequel shows how strong stories are built up through interaction between narrator and audience. The ‘ergoic’ reaction of the women – the ‘Aha-Erlebnis’ about Nah’s accent – is further expanded by Nah with an additional example in episode 3. Here, too, identity is central: Nah expresses that as a ‘type’ they are not single case. Her accent is, in other words, normal.

As a footnote, note how a whole language-sociological normative world is brought to the surface in what is going on here. The women clearly have an idea of ​​the normative character of accents – in Antwerp a Dutch accent is rather exceptional – and the work that Nah does (explaining her migration trajectory) should make this exceptional fact understandable, normalize it. But we also see, in episode 3, that Nah connects various languages ​​and accents with various social environments: her relative from Merksem speaks Dutch with the family in the Netherlands, “Flemish” at school, and Tamazight at home. This also provokes laughter from the women: the situation is recognizable. We have shown the relationship between all these elements by using purple in the transcription: the purple elements form a coherent whole of argumentative movements.

Episodes 1-3 are related, as we saw, and they take us from the name to the language of Nah. Now she continues. She opens Episode 4 with “I only learned Dutch for one year at school”. The phrase “only one year” is again the expression of the norm: one year is very little, and “normally” someone would have had to take Dutch lessons much longer to reach her level of language competence. All the more so because she suggests that she must have been quite a good student – the teacher was taken aback when she left the class – and that this was not a matter of choice but of necessity – she had had a child.

She follows this surprising statement with an emphasized (because repeated) statement: “but I keep speaking Dutch” – “I dare to speak” – “I keep talking”. Her fluent Dutch and articulation can be explained, not by formal education but by persistent practice. And to emphasize this, she places between the two repeated elements a (‘intensifying’) reference to what she indicated at the very beginning. “I dare to speak”, “my husband sometimes says: a little quiet”. This again provokes laughter because it ties in with the “traditional type” given that she already pointed out in episode 1. Even though she is traditionally linked to a man, and this man sometimes tries to steer her, she still stays and dares to speak (Dutch).

The thematic shift we saw here – from name to language – is nothing out of the ordinary: we are not always coherent when telling a story, and we like to jump from one subject to another as we do it. But we rarely do that at random: we usually do it to make a point through a multitude of building elements.

Throughout the complex and interactional developed structure of this story, Nah produces a coherent argument: she explains who she is. Her name is the starting point for an explanation of her migration trajectory and her social characteristics – a strange accent in her use of language. And that, in turn, serves to make it clear that, despite the “traditional” category in which one might place her, she is a woman who will not be silenced but “keeps talking”, even though she has she received little education and even though her husband is not always happy with her empowerment. So the departure and destination coincide nicely: this is Nah. The yellow color and the braces in the transcription indicate this relationship.

Nah builds this story about himself through a constant reference to norms, to what is recognizable and self-evident to the audience, as well as strange, deviant or exceptional. And those audience respond (read: evaluate, assess) all of that immediately with laughter and comments. And in this way they do what we always do: through specific forms of interaction we create specific forms of communality. Through the concrete structure of her story and the interaction with her audience, Nah places herself inside this group of women, through a repeated appeal to normal as well as exceptional matters, who together must make clear who she is in relation to the other women.

She makes something else clear: why she is here. We saw that this clip was taken from the very first round of a very first session in a project. The aim of the project is ’empowerment’, if you like: it should allow women who do not speak often, with care for their words and respect for who they are. With this brief intervention, Nah immediately places himself within the group and within the specific form of interaction that this project aims and uses: I am articulate, I “do everything myself”, I “dare and keep talking”, and my remarkable personal history explains Which. The identity she builds up here is therefore both an individual identity and a group identity, both adapted to the very specific context in which all this takes place. 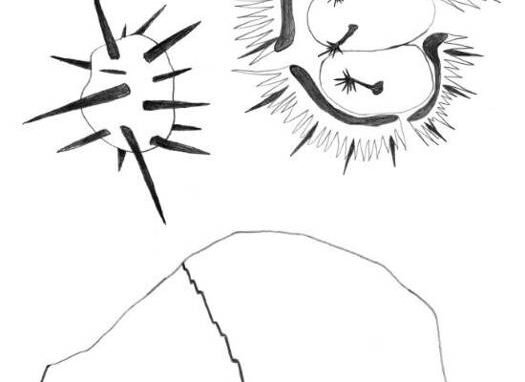 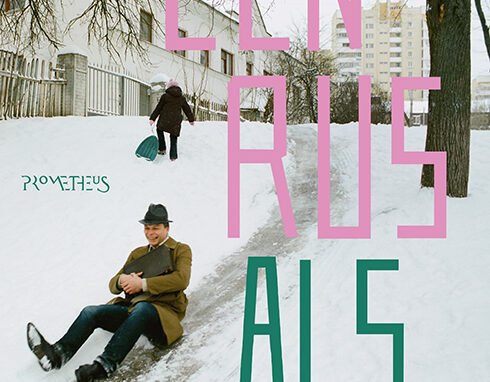