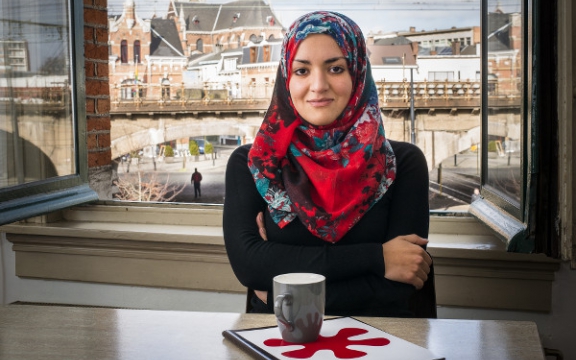 Open letter to US ambassador to Belgium, Denise Campbell Bauer

I
received your invitation to take part in an Iftar evening on Wednesday, July
ninth, 2014. An activity that aims to gather various representatives of the
Muslim community, and that has been a tradition at American embassies worldwide
for quite some time now. I promised myself that this time things would be
different. After years of absence, this time, if I would accept your
invitation, I would have the courage to do away with small talk and discuss the
only topic I would really want to talk about with a US ambassador, that
is, Palestine. Yes, the elephant in the room. It is always there but somehow we
have managed to tiptoe around it. Only now it had grown so big, there was
barely room left to breathe, let alone think about anything else.

I
really wanted things to go differently at the Iftar, but they didn’t. As I
walked in to be greeted by members of your staff, the first thing that caught
my eye was the gentleman wearing a Palestinian kufiya. This led me to
breathe a sigh of relief. There were more people with Palestine on their
mind, I thought. Walking into the elegant dining room and seeing the
authoritative religious figures of our community, I was sure there were
going to be more than just prayers for Gazans tonight. There were going to be
heated discussions. I thought. Unfortunately, nothing of that sort.

Each
time words of gratitude, respect or admiration were expressed, I felt like
shouting at the top of my longs „what about Palestine?!!”. I want to say that I
feared the response of the huge security officers ten feet away from us, to
make it sound as if there was some sort of a threat, but there wasn’t. I wished
to somehow echo the voices of Palestinians, and voice a message inside that is
often only heard outside of embassies. But I guess I didn’t think things
through. I don’t know what I expected would happen with my invisibly small pin
supporting Palestine, and the countless questions running through my mind. I
want to say that the setting did not lend itself to a proper conversation as we
did not even meet due to a tardiness on my end, but again, that wasn’t it. I
could have easily approached you.

No, mostly it was my own inhibitions. Shying
away from the dozens of confused gazes and frowns I anticipated once I raised
the highly sensitive topic of Palestine. My upbringing had something to do with
it. Seen as I have learned not to launch a provocation when someone has invited
you into their home. In the end, I came, I saw and I basically chickened
out, so I left. In hindsight, maybe the best approach was not to accept your
invitation in the first place. But I did. As a strong believer that everything
happens for a reason, I think I needed this overwhelming feeling of guilt and
frankly, humiliation, to trigger an actual response instead of wallowing in a
sense of helplessness.

I needed this feeling that developed inside of me when I
returned home from the Iftar, to watch the news rerun and hear that infamous
phrase being uttered by another White House spokesman, adding insult to injury:
“No country can accept rocket fire aimed at civilians and we support Israel’s
rights to defend itself against these vicious attacks”. Everybody knows that
these words – that are passed on from administration to administration – are
the US government’s way of saying to Israel: whatever your military actions, we
approve. From that moment on, each word that would follow to express sympathy
or call for peace, would become meaningless.

I
felt sick to my stomach when I heard these words, madam Ambassador. I could no
longer sleep from watching the images of their impact. That is when I decided
to write you this letter, which I hope you will take time to read. If you are
truly interested in having a genuine conversation with us Muslims, I hope you,
and your president, will acknowledge the concerns many of us have. I for one
can no longer ignore this issue that stands between us, and that will continue
to stand between us as long as we do not address it openly.

The targeted
kidnapping and killing of Israeli children was horrendous and should be
condemned and prosecuted, but condoning the collective punishment of an entire
civilian population – including many Palestinian children, with no way to
escape, leaves me with no words. We all know the cause of this recent
escalation of violence was not “just” a criminal act of a few Palestinians,
resorting in a brutal retaliation from the Israeli army. I wish your president
would acknowledge that the situation is not that straightforward. I wish he
would demonstrate the same critical insight and boldness he displayed
commenting on the murder of young Trayvon Martin, which was not “just” a murder
but an act tied to a history of violent oppression and criminalization of
African-Americans in the US.

There are no Palestinians living in Gaza. There
are only Palestinians being held captive in the world’s largest open-air
prison, suffering from harassment and intimidation, being humiliated on a daily
basis, denied their dignity, robbed from their land and their homes and
stripped to their flesh and beaten simply for being born in the “wrong” place.
We seem just fine accepting decades of violent occupation and oppression of
Palestinians, as long as we keep telling ourselves that it is two equal parties
fighting with the same power and means, for land they have equal claim to. So
when one party acts with all its means, the other party has “the right” to
retaliate, with all its means. The truth is that there are no two parties,
there is an occupier and an occupied, an oppressor and an oppressed, one
creating situations of despair and one resorting to desperate measures. The
truth is that the Israeli government is the only one who can end the
occupation, and the US government is the only one with at least some leverage
to persuade them to do this, or, at least not support them in any way when they
decide not to.

If
you are not going to sit down with us and not only share a meal but also listen
to our concerns, madam Ambassador, I do not understand why you and your
colleagues around the world even bother inviting us to an Iftar evening? It is
not in my nature to be cynical but it does make me wonder whether there is
really nothing more to it than a PR stunt. One that seeks to show Muslims
around the world – especially those your government has left to suffer, or,
inflicted suffering on through its project for a New Middle East – that your
policies are not all bad. That you have the support of the Muslims who take
part in your activities.

Or, is it part of a post-9/11 outreach program of some
kind to bring closer those people you believe hate Americans? So as to keep
your friends close but your “enemies” even closer? I don’t know what your
fellow countrymen were made to believe about Muslims but we don’t hate
Americans, nor do we hate their way of life. Many of the people I respect and
admire most are American. From modern-day economists, like Joseph Stiglitz, who
seek to promote justice through equitable economic policies, to the great civil
rights leaders of the past who continue to inspire me and members of my
community to this day, like Malcolm X, Dr. Martin Luther King Jr., and many
more. Added to that list are the human rights advocates and community activists
I met with recently taking part in the International Visitor Leadership
Program.

An opportunity I am grateful for and a program I champion, for
many more reasons than the simple fact that it allows for taxpayers’ money to
be spent on fruitful international exchange rather than the military. It
allowed me to meet with people like Mr. Hilary Shelton of the NAACP, who
seeks to strengthen democracy in the US by determining the needs of the
African-American community and putting them on the agenda of mainstream
politics; Miss Janus Adams, an award-winning author who lived through
experiences of mandated desegregation and who shared with me crucial insights
about current developments in the American society; Miss Linda Sarsour of the
Arab-American Association who is dedicated to making the lives, and ethnic and
religious heritage of Arab-Americans part of the diverse US fabric in any way
she can; to name but a few. These wonderful encounters with admirable Americans
do not mean that I am going to stop being critical of the US government’s
foreign policy. It does not mean, madam Ambassador, that I will remain silent
and disregard the injustices that are allowed to persist by your government’s
choice to turn a blind eye. The biggest injustice of all being the violent
oppression of Palestinians.

Madam
Ambassador, the attempts your administration has made to reach out to Muslims
in the West have been important and substantial. However, these attempts at
reaching out remain pointless if one is going to willfully ignore the ongoing
suffering of Palestinians and the effect it has on our communities. Few
people are insensitive to the agony of the Palestinians, but for us Muslims
this sensitivity reaches a new high during the month of Ramadan, because we no
longer have food to dull our senses.

What is then the point of sitting together
for an Iftar, if we cannot address the collective punishment of Palestinians
endorsed by your administration and president? What is the value of such
gatherings, if your administration is going to keep defending Israel’s
disproportionate use of military violence, against a people that is worn down
by a neglected occupation? The Palestinian death toll from the Israeli air
strikes has topped 160 deaths – and counting – of which more than three
quarters civilians. If we cannot talk about this, Madam Ambassador, I am afraid
there is very little left for us to talk about.